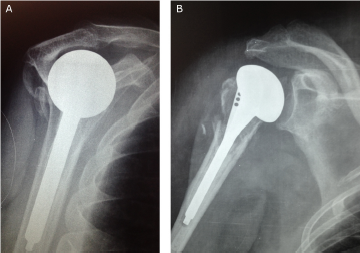 Intrathoracic fracture-dislocation of the humerus – case report and literature review

Shoulder fracture-dislocations are uncommon. Those associated with intrathoracic disloca-tion are very rare conditions, resulting from high-energy trauma; usually, the affected limb is in an abduction position. In Brazil, there is only one report of a teenager with displacement of the epiphysis into the chest cavity; the present is the ﬁrst adult patient report of intratho-racic dislocation of the humerus. The authors present the case of a patient female, aged 56 years, who was hit by motorcycle and thrown approximately 5 meters away.

She was res-cued on site with thoracic, pelvic, and right upper limb trauma. Her chest was drained due to pneumothorax and multiple fractures of ribs; she was diagnosed with fracture-dislocation in four parts, with intrathoracic dislocation of the humeral head. Displaced forearm bones fracture was also diagnosed; the olecranon, scaphoid, and ischiopubic fractures were not displaced. The patient underwent a joint procedure with a cardiothoracic surgery team to remove the humeral head through thoracotomy and chest drainage; subsequently, a partial arthroplasty of the humerus was performed, with graft from the humeral head and ﬁxa-tion of forearm fractures. Conservative treatment was chosen for the other fractures. After three months, all fractures were healed with gradual functional improvement.

The patient remained in physiotherapy and orthopedic monitoring, having been discharged from the thoracic surgery; in a severe depressive episode, the patient committed suicide after 11 months of the trauma.

Fracture-dislocations of the humerus are relatively uncom-mon. When associated with intrathoracic displacement, they are extremely rare and potentially fatal. The cases described in the literature have in common high-energy trauma involved, the position of the limb (predominantly in abduction), and lack of age group predilection. Penetration of the humeral head into the thoracic cavity is due to the fragility between the upper ribs, which facilitates migration. The severity of the condition stems mainly from pulmonary involvement and the numerous injuries frequently observed in this type of lesion.

The authors describe the ﬁrst case in the Brazilian literature of an adult patient with an intrathoracic fracture-dislocation of the humerus, after being run over by a motorcycle.

A female patient, 56 year-old, right-handed, was struck by a motorcycle and tossed ﬁve meters away; the mobile emergency care service (Servic¸o de Atendimento Móvel de Urugência [SAMU]) team provided pre-hospital care and she was taken to the public hospital. Physical examination showed a severely polytraumatized, hypotensive, and tachypneic patient, with cervical and right upper limb immobilization; she presented large edema in the right shoulder, a defor-mity in the forearm, and ipsilateral elbow.

At admission, neurological and vascular examination were normal. After radiological evaluation, serial rib fractures, displaced forearm fracture, and undisplaced olecranon and scaphoid fractures were diagnosed, as well as fractures of the ilio- and ischiopubic branches with minimal displacement. What called the atten-tion of the entire team was a fracture of the proximal humerus with absence of the humeral head; after imaging exams were reviewed, migration of the head to the interior of the thoracic cavity was evidenced. Patient was diagnosed with hemopneu-mothorax and underwent an emergency procedure for chest drainage; subsequently, she was taken to the intensive care unit.

Nine days after trauma and stabilization of the hemody-namic and clinical picture, she was referred to this service for deﬁnitive fracture treatment. Initially, a radiological assess-ment and a computed tomography with 3-D reconstruction of the shoulder and thorax were performed, (Figs. 1 and 2A and B). The authors requested an assessment by the cardiothoracic surgery team, who agreed to do the procedure together. Patient was then submitted to a thoracotomy to remove the humeral head (Fig. 3), followed by new thoracic drainage. Subsequently, a partial arthroplasty of the humerus was performed, using the humeral head as graft (Fig. 4).

The forearm fracture was ﬁxated with conventional compression plates; other fractures were treated conservatively. Fourty-eight hours after surgery, patient was discharged from the ICU and the chest drain was removed; she remained hospitalized for three days before dis-charge. During orthopedic follow-up, she presented fracture consolidation (and even consolidation of the tubercles next to the prosthesis [Fig. 5]), and obtained a partial gain of shoul-der movement. She evolved with reﬂex sympathetic dystrophy of the upper limb, which was diagnosed and treated. She achieved a shoulder range of motion of 100 degrees of anterior elevation, 30 degrees of external rotation, and internal rotation at the level of L1. Eleven months after the initial trauma and in a severe depressive state, she committed suicide. 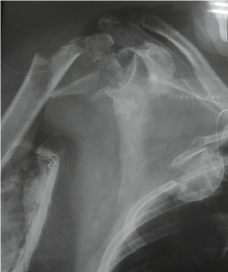 Fig. 1 – Radiograph of the right shoulder, showing a complex fracture of the proximal humerus with intrathoracic migration of the humeral head. 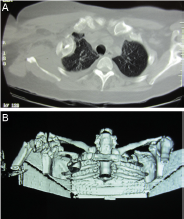 Reports of intrathoracic fracture-dislocation of the humerus are extremely scarce in the literature. After an extensive review in the main database, only 24 articles (20 of which in English) reporting patients with this type of lesion were retrieved. West1 was one of the ﬁrst authors who reported this type of atypical presentation in an adult patient, who suffered a fall from height.

Other similar injury reports were described by Glessner,2 in 1961, and by Pattel,3 in 1963, whose patients underwent fracture reduction and ﬁxation with satisfactory results. In both cases, patients were elderly with low func-tional demand. Watson-Jones4 also described the case of a patient with fracture-dislocation and remote migration of the head, but with no further details.

In the 1990s, Wirth et al.5 and Simpson et al.6 described cases of younger patients who suffered motorvehicle acci-dent, one of whom was struck and tossed for approximately six meters, a mechanism similar to the present case. Har-man et al.7 reported a case of a 56-year-old patient, the victim of a rollover, with intrathoracic fracture-dislocation of the humerus with severe comminution, who underwent removal of the head from the thoracic cavity, followed by hemiarthro-plasty.

The only article retrieved in the Brazilian literature reported the case of a 14-year-old female patient with a ﬁxed intrathoracic fracture-dislocation, whose six-year follow-up indicated an excellent functional outcome, despite partial avascular necrosis.8

The removal of the humeral head and fragments, followed by hemiarthroplasty at a later time, was described by Galois et al.9 and recently by Fang et al.10 in patients with compres-sion of the thoracic aorta by the presence of the humeral head. This patient had to wait three weeks until clinical stabiliza-tion for arthroplastic reconstruction. A single article, by Boyer et al.,11 reported a case of fracture-dislocation in four parts with intrathoracic displacement, with satisfactory results. The use of hemiarthroplasty for shoulder reconstruction has been a trend in recent reports11–13; only one article men-tioned the use of reverse arthroplasty in a patient aged over 60 years.14 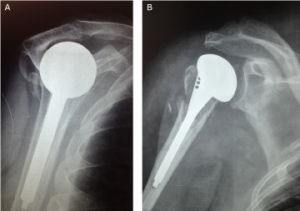 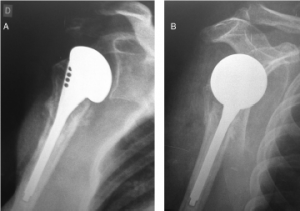 In the present case, the probable trauma energy associated with the abducted position of the arm contributed to severe comminution of the fracture and intrathoracic displacement of the humeral head. Moreover, the other fractures are evidence of the dissipation of this energy throughout the upper limb. Performing a single, combined procedure with both teams was effective, with initial removal of the humeral head followed by shoulder hemiarthroplasty.

The forearm was reduced and ﬁxated with plates and screws immediately after the end of the prosthesis. After 11 months of follow-up, patient presented regional complex pain, which was expected due to the severity of the orthopedic condition; pain prevented adequate rehabilitation. Unfortunately, the patient’s depression worsened further and culminated in suicide one year after the accident.

The combined procedure, in which cardiothoracic and orthopedic surgery were performed for the removal of the humeral head followed by hemiarthroplasty, was effective and without complications in the short-term, which is in agree-ment with the scarce literature on such lesions.